Yesterday morning I cleaned up the apartment and decided as a reward I would go see Downton Abbey at the Castro theater.  The film was at noon and started right on time.  Just as the lights dimmed a group decided to sit in my row.  I had left the first two seats available but there were five of them.  Three crawled over me and two sat next to me in the two available seats.

All of a sudden I felt a hand pat my thigh and then this women handed me a bottle of water which I did not take.  I said to her after she said it is yours, “You are not speaking to whom you think you are!”  She said, “It is your water.”  I said, “I think you are mistaken.”  She realized then that I was not the person intended and she and her husband both apologized to me and crawled over to the others!  She must have been so embarrassed! 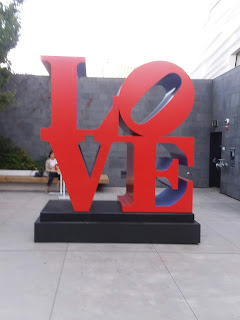 At the SF Museum of Modern Art
nt from my iPad
Posted by john at 1:58 PM

I LOVE postcard 5, my favorite so far.
I also enjoyed your episode at the movies, was it good?

These postcards are terrific John. And you have the most amazing experiences- the movie on here is an example- your gift in sharing them the way you do is one of your wonderful talents.

Love the colours in this postcard and your story of the 'pick-up' (not). Hee hee. Bet she was blushing...
Keep having fun.