Dei ricordo, the memory,  is a six-sided work opening to the final triptych.  It is narrative in nature with the bird watcher and one of the a farmers being prominent in the narrative. Throughout this work there are hints at what has transpired in the lives of the three people.  Let your imagination piece this puzzle together. Since this was a piece of mail art, the sixth side is for the intended addressees.﻿ 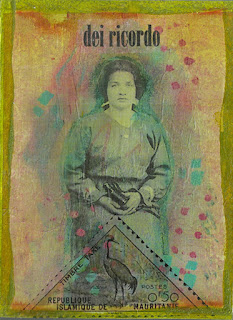 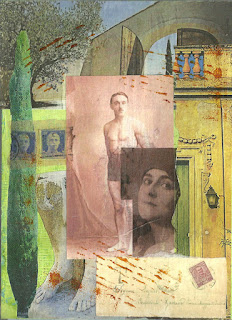 ﻿﻿
I am especially pleased with the center portion of the triptych as it really appears to be a total work in and of itself.  This portion is actually fifteen separate pieces of paper collage together to see what you see.  I learned a lot about printing on tissue paper for this work.  I also sweated over how to add the left and the right portions of the triptych so that it would appear as one work.  Since the central portion is so dramatic and bold toning down the left and the right so that the center portion would be the focal point seemed the way to go.  I also wanted to take care not to make the piece too balanced.  I considered several options for the left to counterbalance the statue on the right.  Finally I decided against that type of balance.  It would have looked too bookendish.  Just so you know, the number 13 is a lucky number to the Italians.

Of course I  have a story in my head about this piece, however, I am finding that others like to make up their own scenarios.  Go for it and let me know what you think the story might be.
Posted by john at 8:55 AM